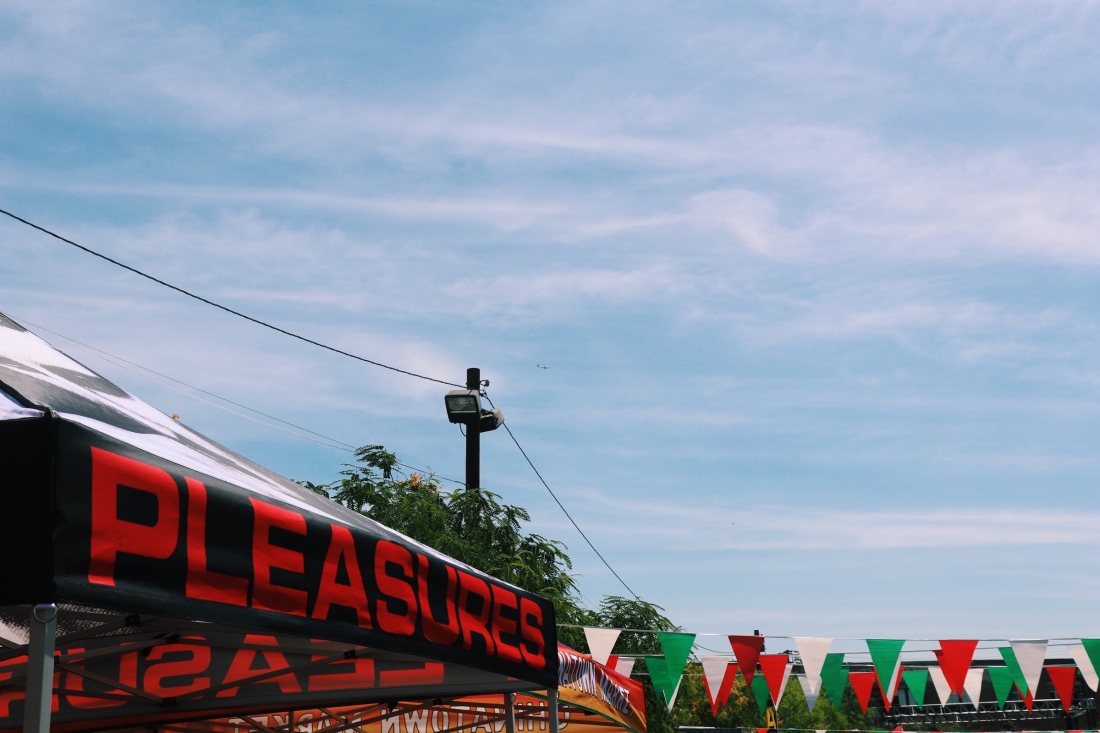 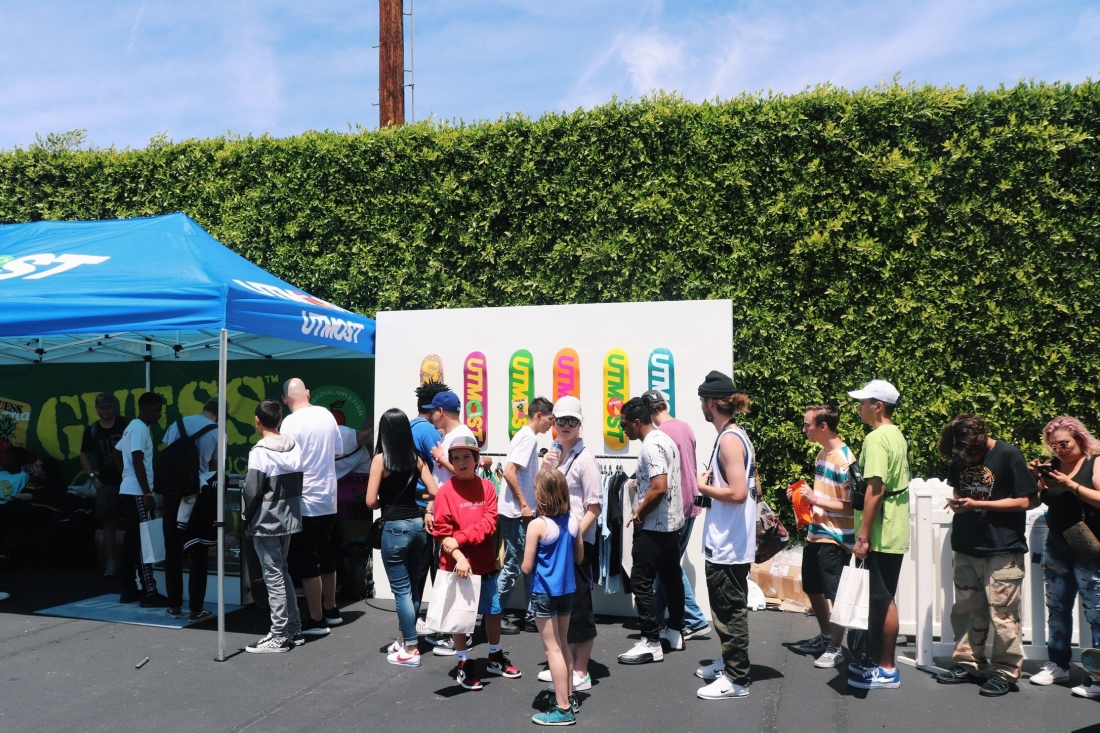 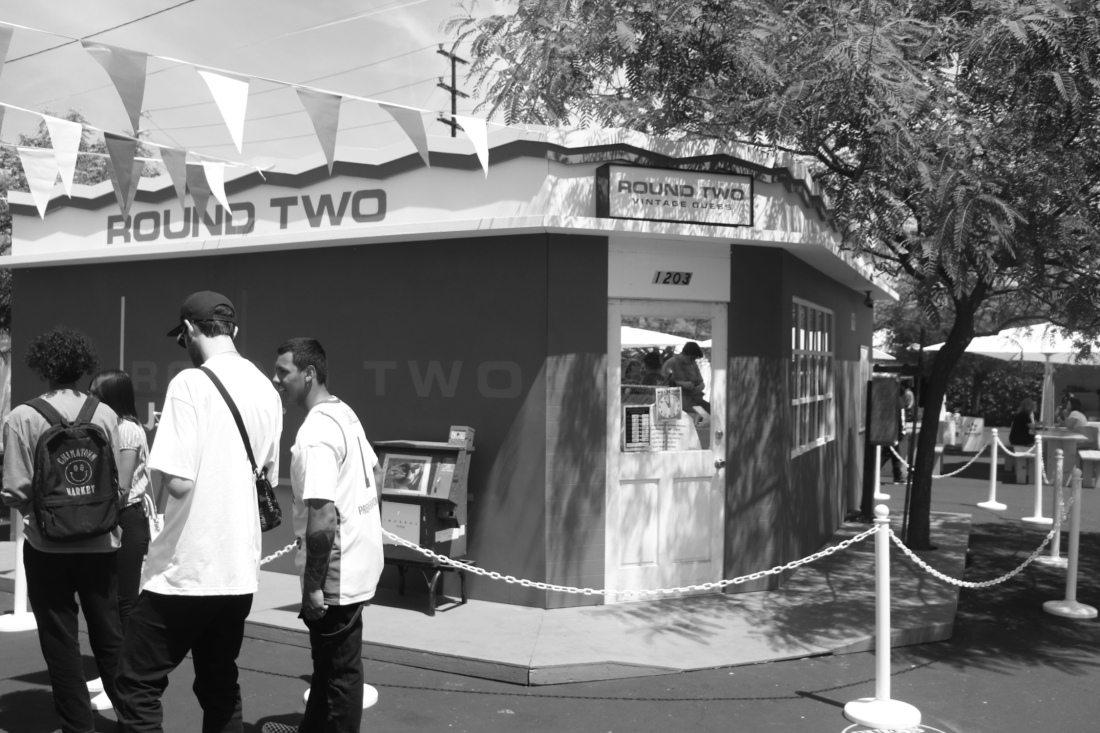 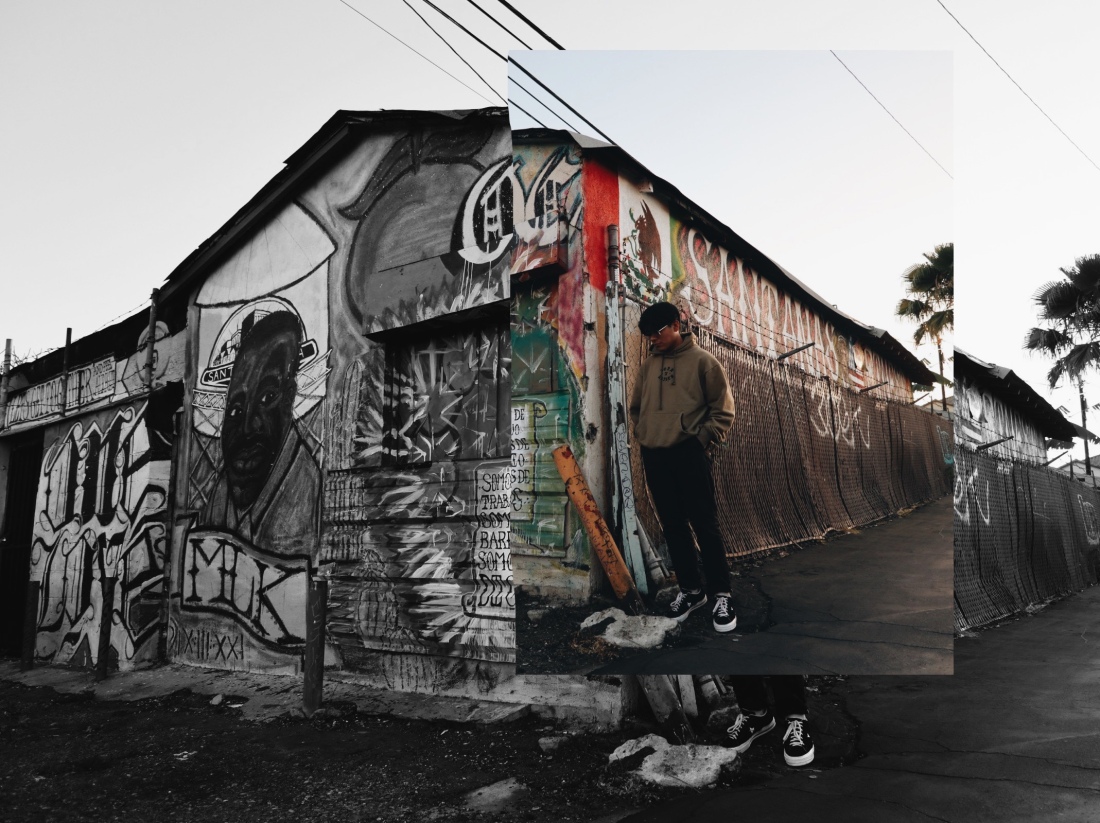 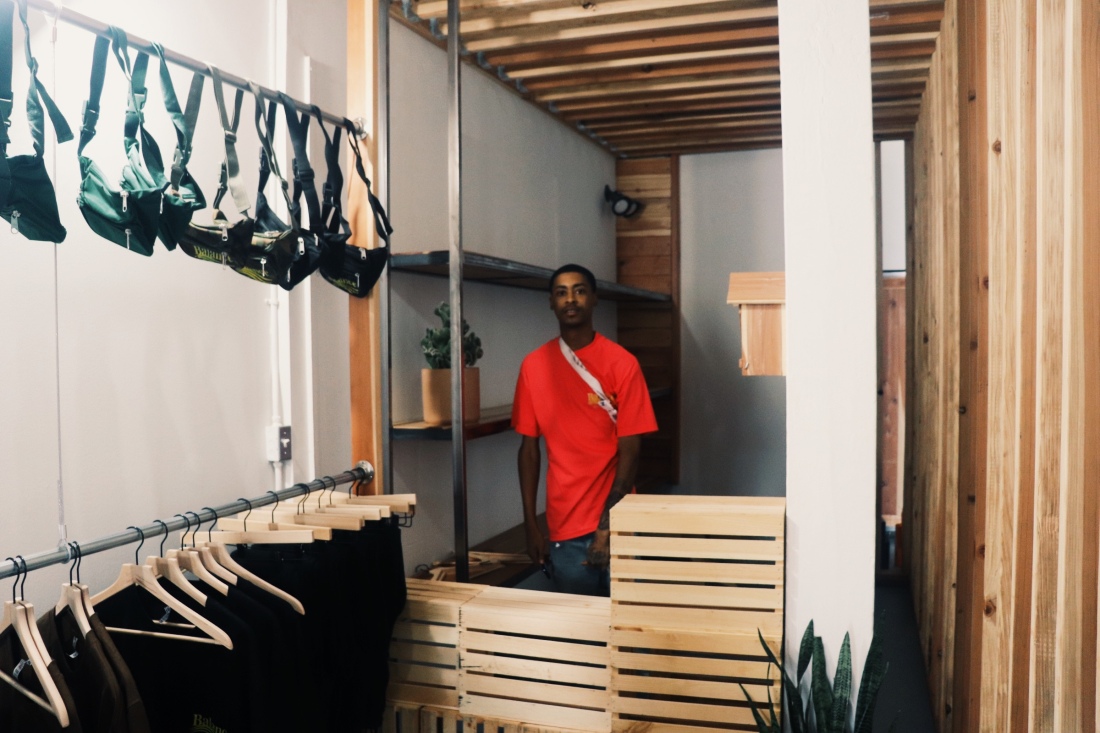 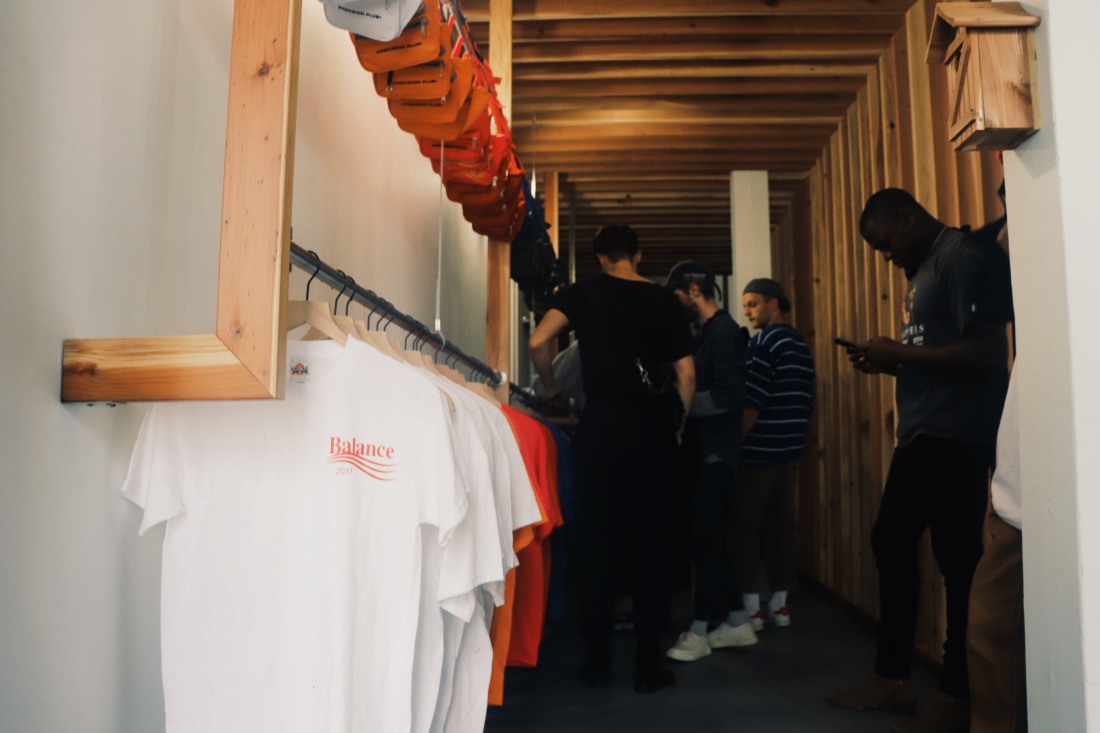 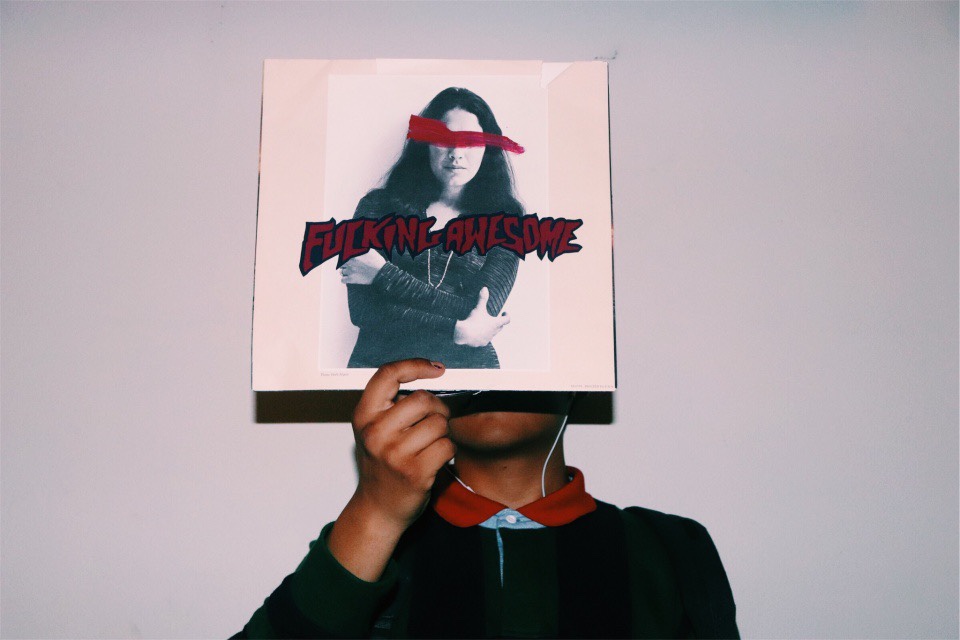 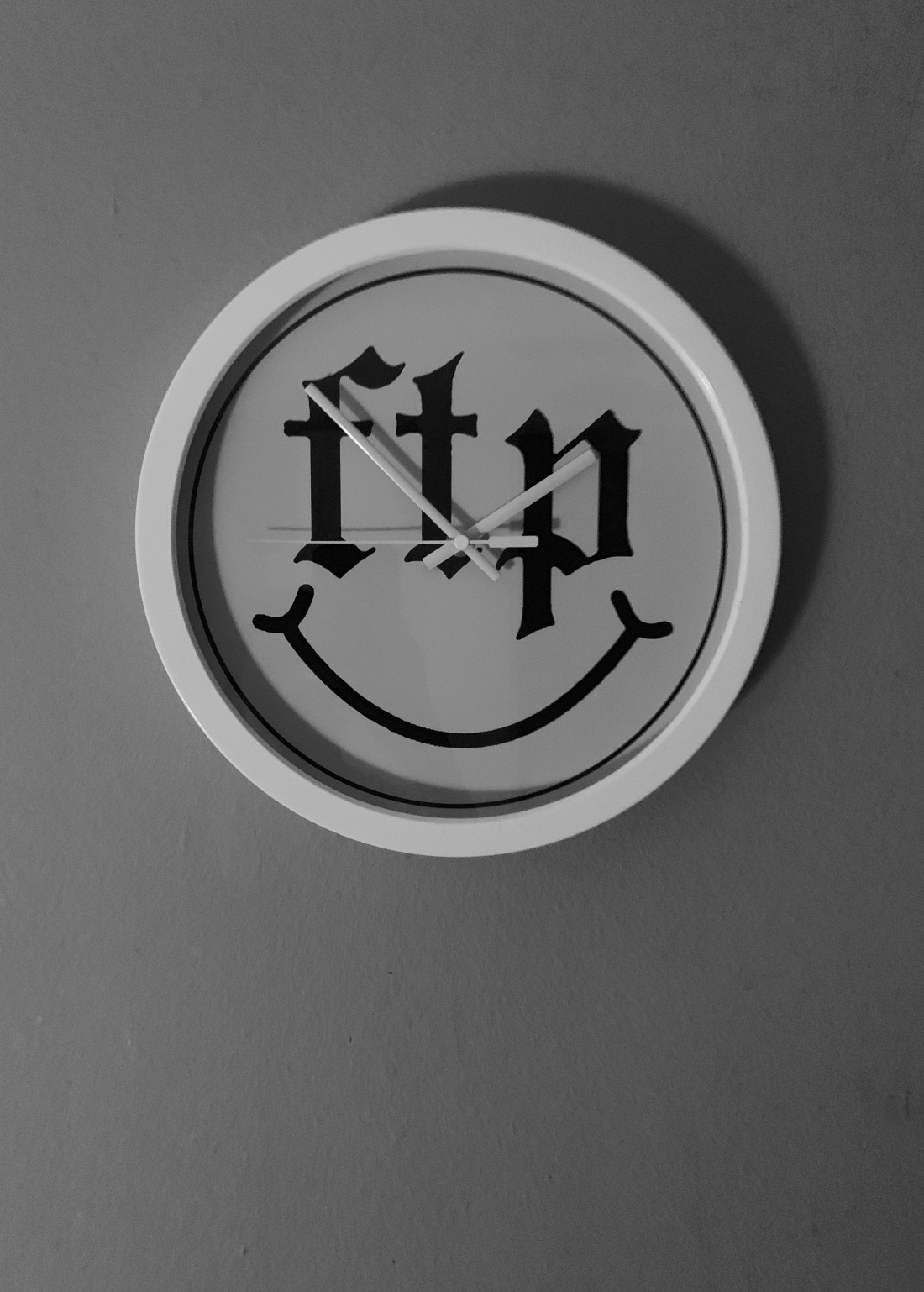 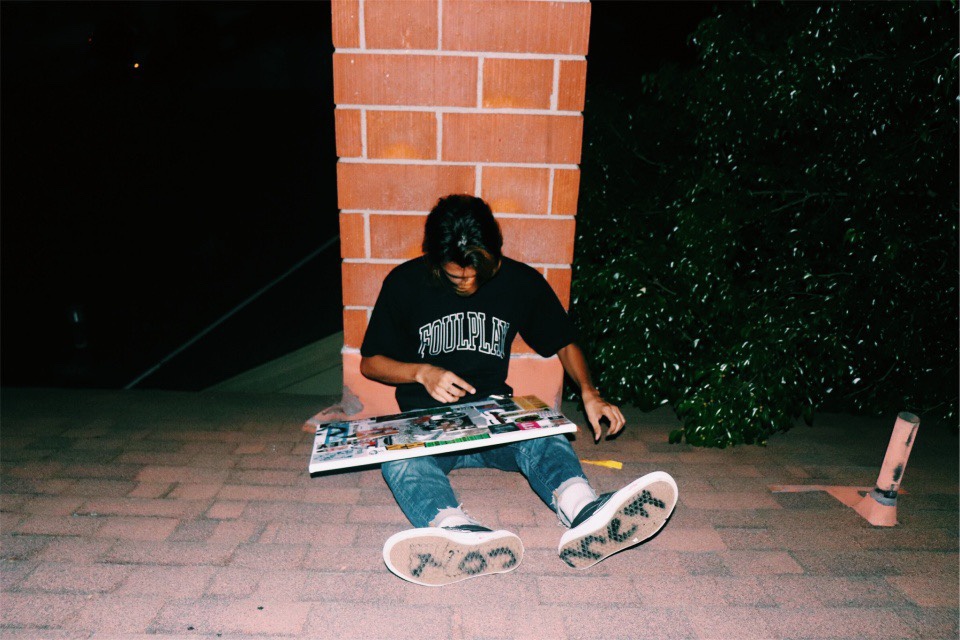 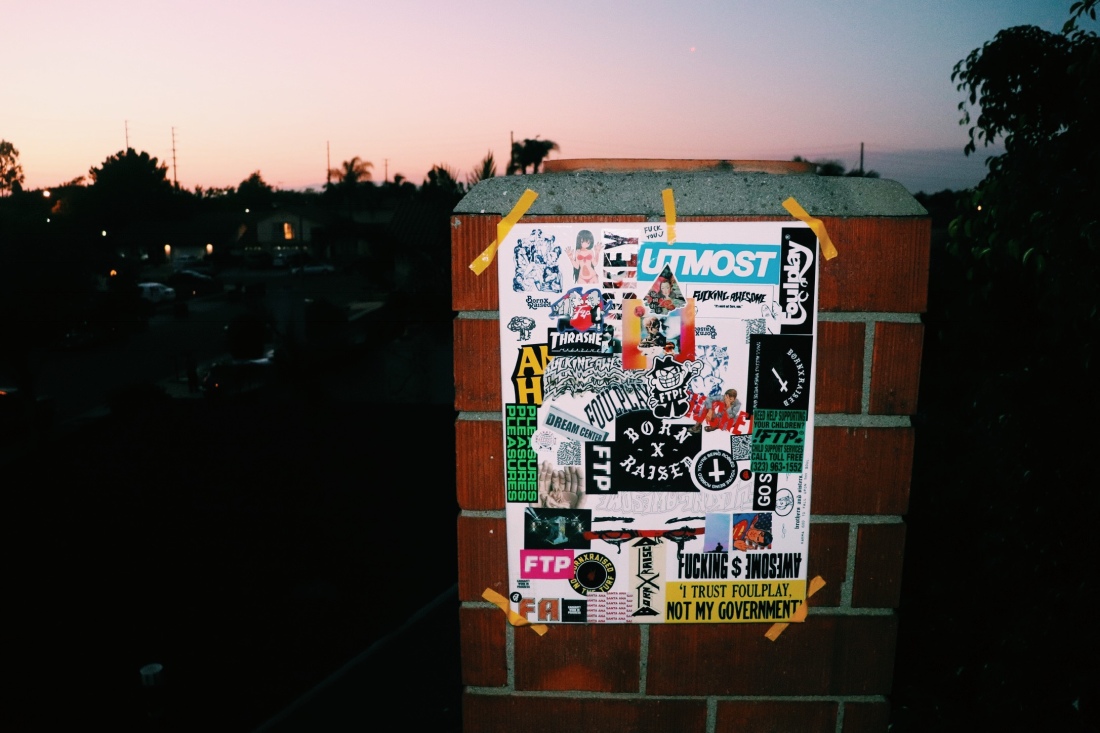 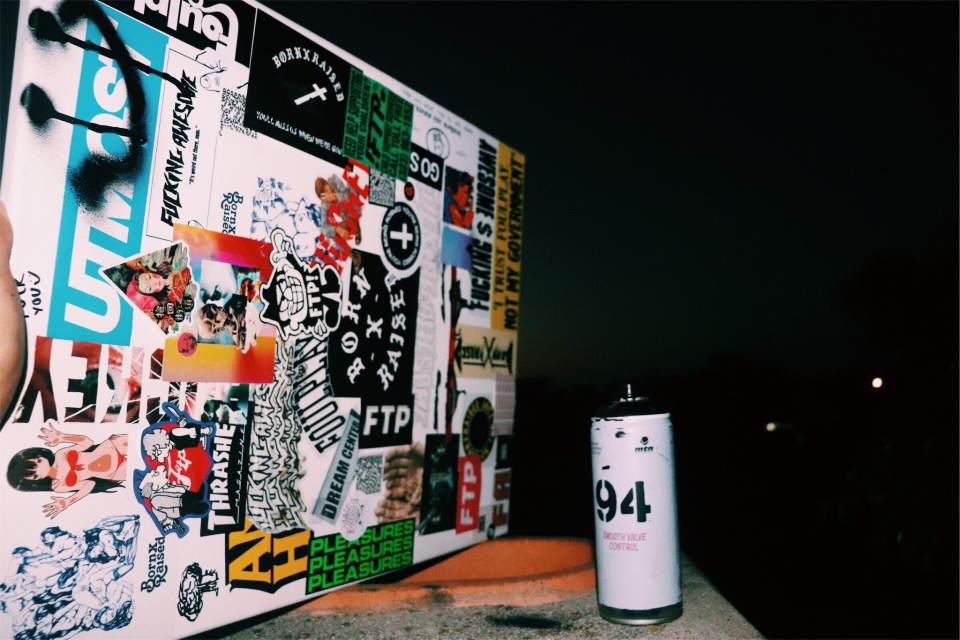 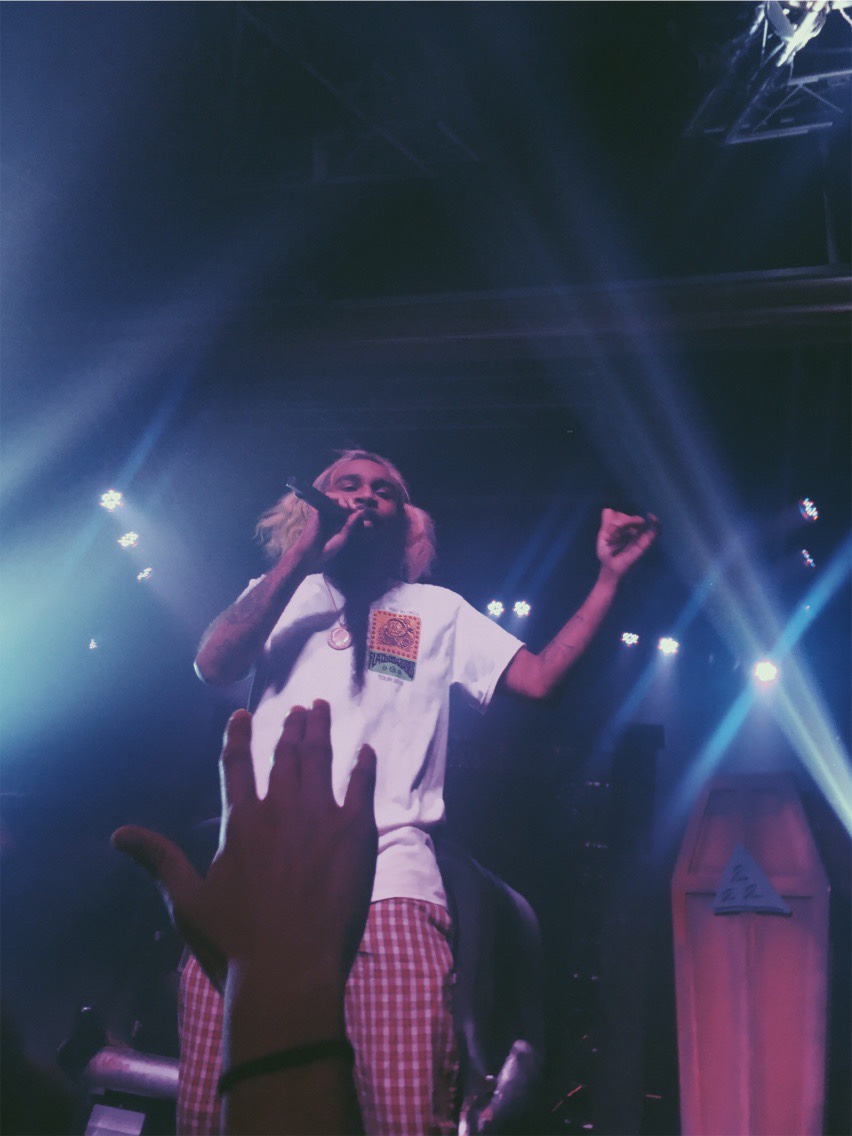 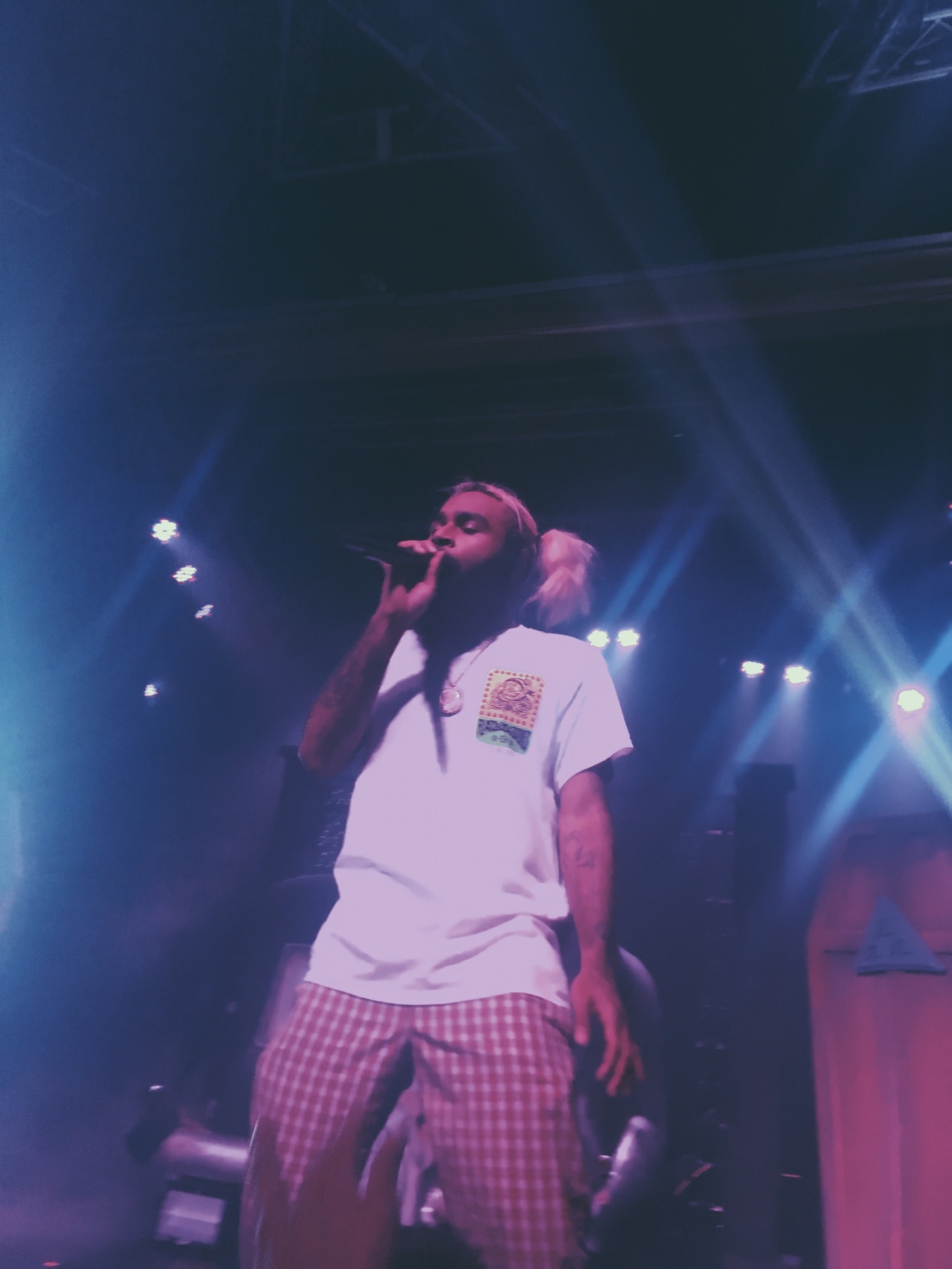 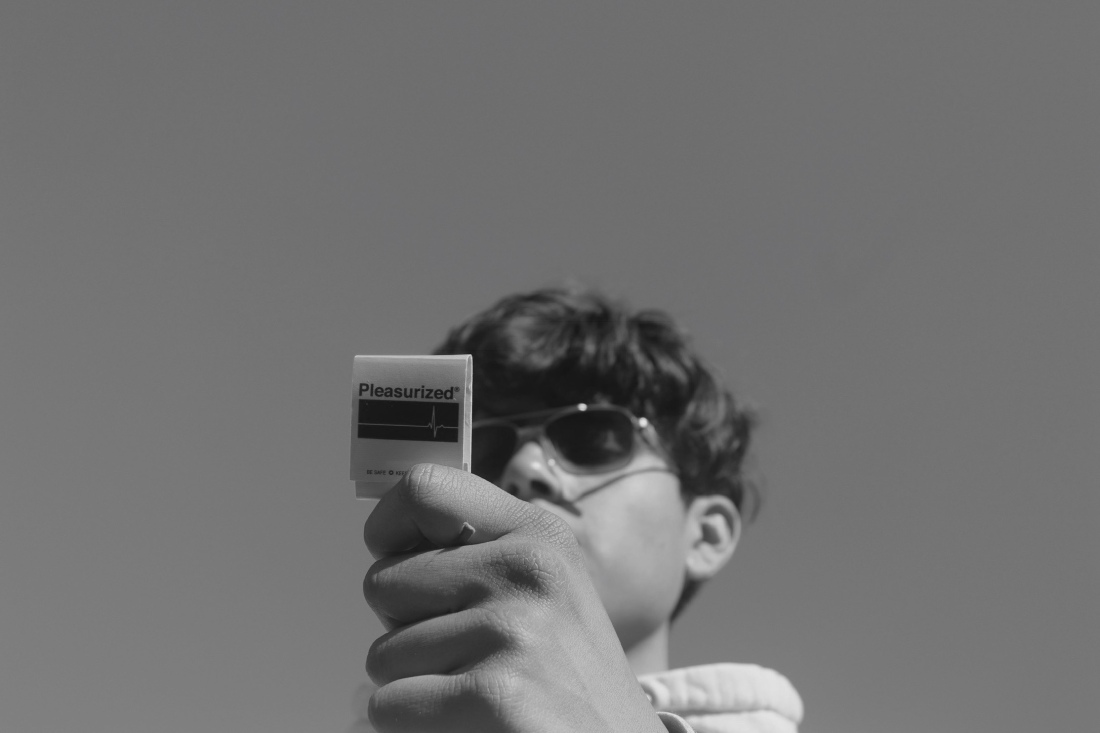 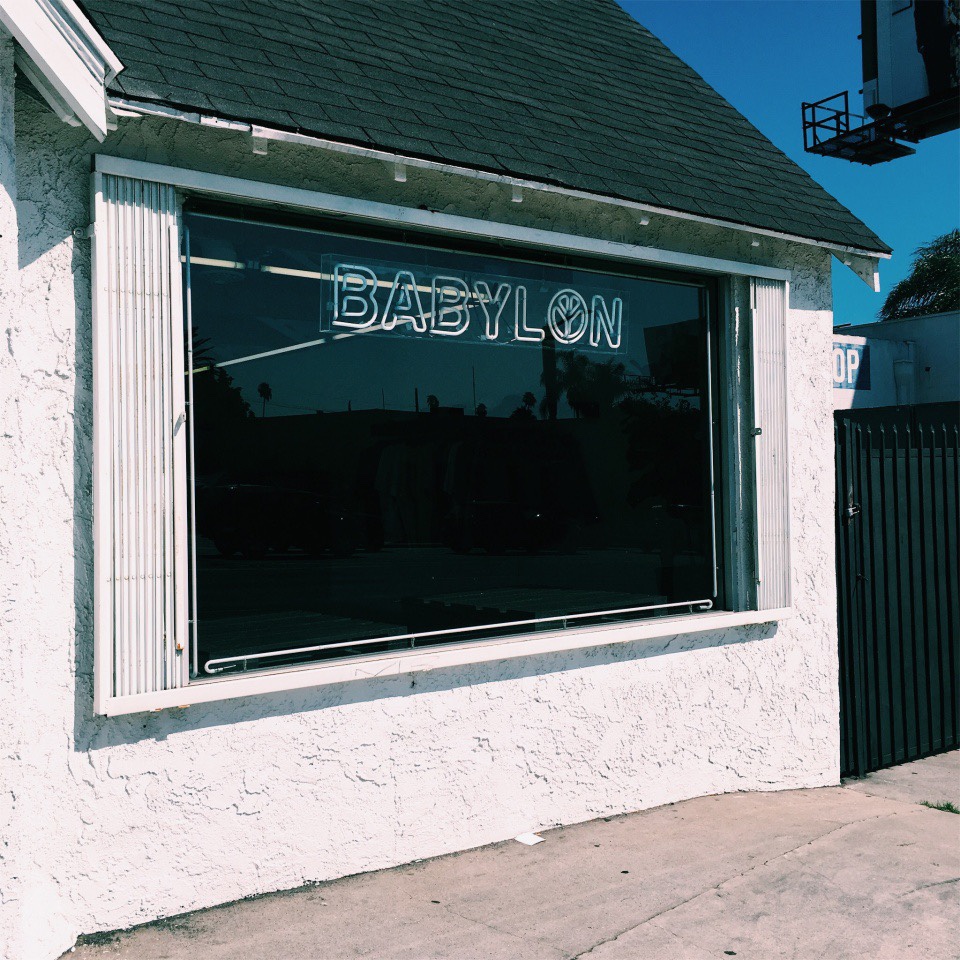 I remember seeing Anwar for the first time and trippin out on how weird it was. I had been watching him in talks and interviews, but now he was in front of me a couple feet away. I was pacing back and forth, walking around the Guess Farmers Market set up trying to get the courage to walk up to him and ask him some questions I had taken over the months. I was nervously talking to my brother continually asking if I should even talk to him; thinking to myself you’re just going to bother him or some dumb shit. I told my brother if he wanted to get something and I would spot it just to have a reason to get up close, when in reality all I wanted was to talk to Anwar. 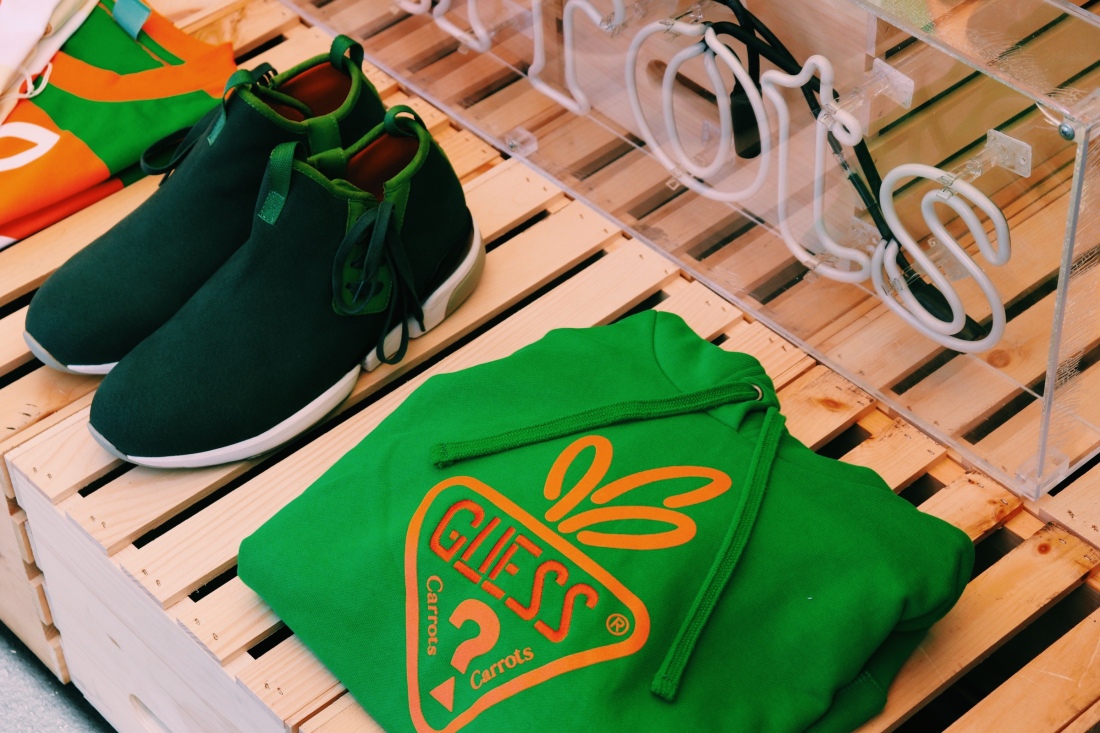 We looked through the rack of a couple shirts and the ones laid out neatly folded in front of the Carrrots neon sign. Timmy, aka modelTimmy aka @truelifeoftimmy, was helping Anwar with the people trying to buy shit. I wanted to ask something, anything to try and start a conversation. I asked if they had some Carrots bracelet I had seen online, to which Anwar said everything you see here is all we have and felt stupid after. My brother decided on a shirt and asked Timmy for the size. I noticed Anwar was taking cards to make the transaction so I knew what was coming. I took my card gave it to him and without thinking just began to express how I fuck with his brand and asked if he could answer some of my questions. I can’t recall the entirety of our brief encounter because it’s been at least a year now since then and I’m only now writing about it. 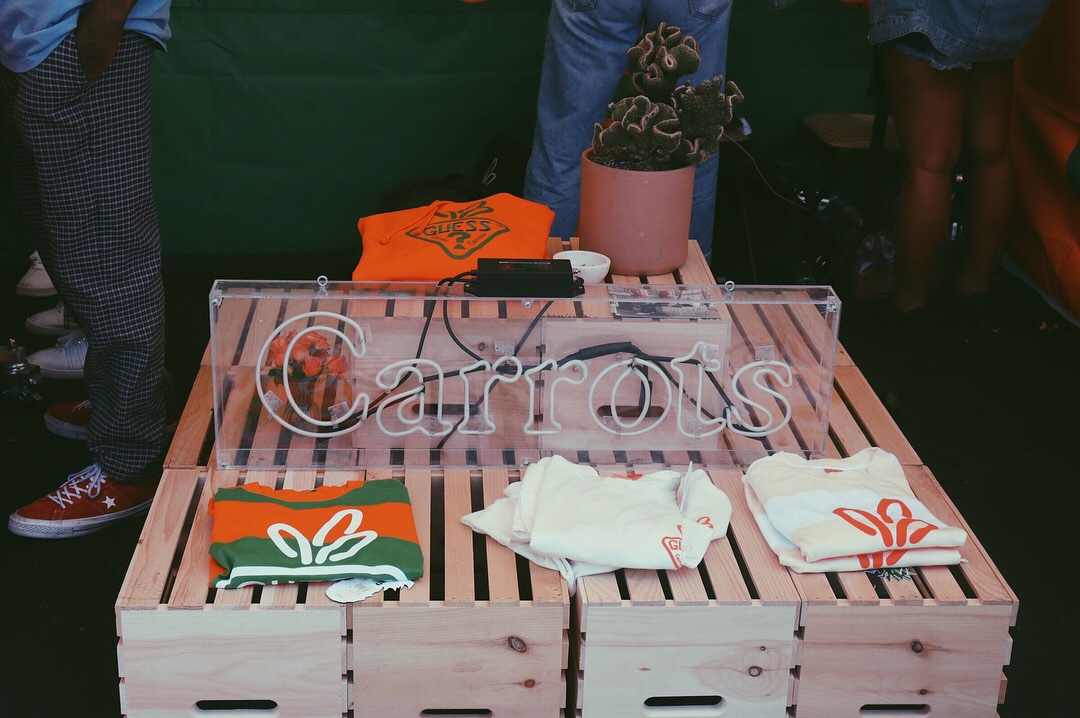 In an interview he did with Microphone Check they ask what was streetwear for him coming up. Anwar believes “you are what you wear.” Many of the early streetwear brands like Fuct, Freshjive, or Rogue Status (which he worked at) would use controversial graphics; mostly to make a statement. All of which took certain counter cultural elements like punk, skating, graffiti, etc. Even some of today’s brands taking it back to it’s roots like an FTP or Foulplay. With that being said I knew Anwar was homies with some of these brand owners that would put out offensive shit. I wanted to know what he personally thought about that, considering his brand is almost completely the opposite of that and had previously mentioned wanting to be the Martha Stewart of streetwear; making “essential goods” for people. Like I said this was a while ago, but he had told me something along the lines about respecting Zac (FTP) because of the affordability of his items and basically saying to each their own. Anwar use to be the kid walking through La Brea wanting to get the flyest shit and having to save his bread for it, but to some kids in the hood they might see a 1000$ price tag or whatever and get discouraged. So I appreciated that and the perspective he was able to give me. I was going through my notes now trying to see what else I had written.

He was talking to me and simultaneously punching in my card info. I quickly found one and asked about the exclusivity of the market, being that Nigo was someone he looked up to but also someone who runs a brand that put out items in limited amounts. Where as Anwar wants to work with a Target or maybe even an H&M to be able to produce large amounts with the same quality, while being able to drive down the price point. I wasn’t sure if he had misinterpreted my question or if I had misheard or not even understood his response but I was too nervous to ask what he was talking about so I just went with it. I do remember him saying something about being able to still interact with people while running his own pop ups. Some brands get to a point where people start lining up in LONGASS LINES and don’t really know what they’re in line for(not that it matters whether or not they know) which would make it hard to personally interact with the core people supporting. I agreed. I think I had put away my phone mid conversation to try and listen to the words he was saying, so I wasn’t able to check my other questions. He asked for my signature to finalize the sale. I felt like I was stumbling over every damn word and I didn’t really wanna keep him too long. Our conversation must’ve been like 5 minutes, probably less. I thanked him and said I had one more favor. “Could I get a pic with you ?” 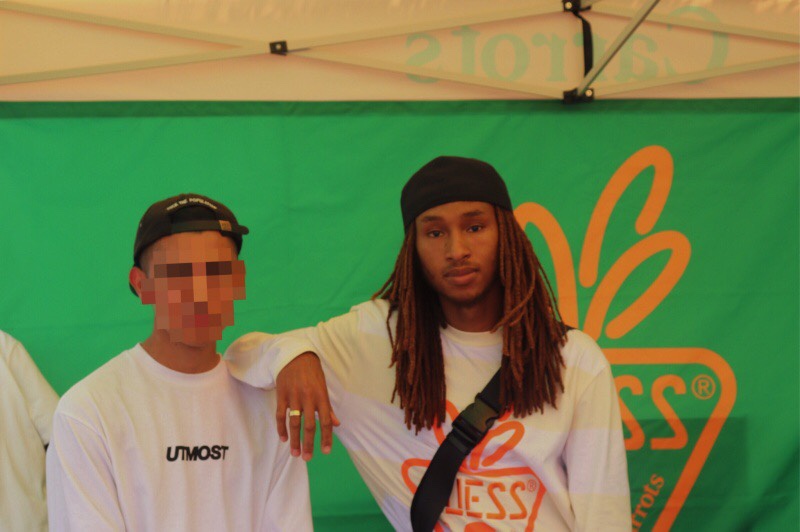 I REALLY FUCKING APPRECIATE YOU for answering my questions that day.

GO CHECK HIS SHIT OUT AT